We didn’t prepare anything sous vide for some time, so we thought that one recipe would be useful before the holidays come. This one is a bit to Asian, which is definitely not bad and combination with beef it works perfectly well. Have a nice Christmas!

a couple of brussel sprouts

Portion the meat to a steaks around 200-300g a piece. Our beef has been matured for 30 days. I tried different temperatures of cooking and the best worked 54 degrees for 3 hours. I am using ziplock bags because I am tired of pulling out the vacuum machine all the time and spending money for vacuum bags. Season the meat with pepper, place it in a bag and add little bit of oil. Cook it for the time instructed and when the meat is ready, cool it in an ice bath. If you want to eat it right away, watch out for the temperature: the meat is already warm so it does not overcook when you seared it. With this method we achieve a beautifully soft result even in meat, which is rather tough and does not have an ideal structure such as fillet.

Clean the celeriac, saving the clean skins for a stock. Cut a few 1 cm cubes, which we will prepare differently later on. Cut the rest of the celery into larger cubes and simmer in butter until soft. This process is needed, the taste is much better than just throwing celeriac into milk. After softening it changes color, turns yellow, then season it with salt pour inside half of the milk. Allow to cook for another 10-12 minutes simmering until tender. Transfer to the blender and mix smoothly. Season with salt, add milk if needed and butter.

Fry the remaining cubes of celeriac in oil, reduce the temperature and add honey, leaving to caramelize and add butter to finish. Season with salt and put aside. Divide the sprouts into leaves and cook in water for a few seconds. Dry the meat on a cloth, season with salt and fry in hot oil in all sides. Cook big pieces of oyster mushroom and pak choi in the pan with little oil. Pour the alcohol in a new pan and let it boil off. Add the broth and the remainings from the zip lock, reduce in half, then add the butter and serve. Enjoy your meal!! 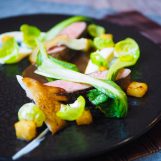